I was going to Morocco looking for colours; literally and figuratively. I realize that 7 days (+2 travelling days) would not do this country (or any other country actually!) justice, but I managed to find what I was looking for.  Bottom line, just gotta make it work!

So folks, if you happen to have only a week to explore Morocco, you might want to follow this itinerary. Disclaimer: This itinerary were planned by my travel partner, Asana, and I.

Here we gooo… Morocco for a week:

Experienced: Hassan II Mosque (from the outside) and a little walk at sunset from the old medina to the coast.

We arrived in the afternoon in Mohammed V Airport, Casablanca. The arrival hall did not really impress me. I really hated it when you just got off from a long flight and they did not provide a jet bridge. Like, really? 😦 Well anyway, spent about an hour queueing for getting my passport stamped. And another half an hour to find a proper taxi to get us to our hotel. Was not my favourite arrival moment.

Where to stay in Casablanca? Booked a room at The Central Hotel, Casablanca. Just like what most travellers reviewed, it has prime location for being located in Casablanca old medina. As for the other aspects it was so-so. We did not spend  the night there, we just needed a transit and shower!  We will be taking night train to Tangier, thus our bed for the night. 😛 The hotel was within walking distance to Gare de Casa Port (10-15 mins walk) and Casablanca’s landmark: The Hassan II Mosque (20-25 mins walk). Though to the later I chose to ride a petit taxi as it was not a pleasant walk for me after the dark.

Transportation? That night as the plan was only to visit the Hassan II Mosque so walking and petit taxis were the choice. To get to Tangier we took the night train from Casa Voyageurs. From the hotel it’s about a 10 mins taxi ride and the station was not as modern as Gare de Casa Port.

Experienced: get lost in Kasbah at the city of Spies and gaze at the Gibraltar Strait (witnessing the tip of Africa and Europe meet)

We arrived early morning in the City of Spies (now that sounded pretty cool) after the overnight train ride from Casablanca. We took the taxi from the train station directly heading to the Kasbah area. Take extra caution in choosing and bargain for your taxi. Make sure they use meter and act like you really know what you are doing so you won’t be a scam target. Too bad we were there on a Sunday so museums were closed. But I enjoyed being in the midst of the traditional market and watching it waking up. I had breakfast in the park and tried my best to catch the sunshine. After spending the day around the city, we headed to the bus station for another ride to Chefchaouen.

Where to stay in Tangier? We did not spendthe night in Tangier as we took a night bus to Chefchaouen. Anyway, we managed to find a hostel where we could have our bags kept, so we could explore the city freely. The owner was very nice, we bargained at first to pay him for keeping our bag, but in the end he just let us flee with no charge.

Transportation?  We took taxis to and from the station to Kasbah. To explore the city walking around was our choice.

Experienced: the magnificent blue pearl of Morocco… seriously, this place is so beautiful and colorful.

I have previously written about my experience in Chaouen here. Enjoy!

Where to stay in Chaouen? There are so many accommodations to choose in this charming little town. Our choice was Riad Baraka. I enjoyed the atmosphere and their rooms were spotless! They served breakfast, too. Very homey breakfast menu and not to mention super friendly and helpful staffs.

Transportation? In Chaouen, walking remains the best option. Meanwhile to get us to the next city, Fez, we chose to ride another CTM bus. From the entrance of Chaouen medina, we took petit taxi to the bus station.

Arriving in Fez late at night, we were picked-up by our hostel. Funny thing (or silly rather): we booked the hostel on the wrong date. DAAA! Our supposed-to-be host tried to be kind and book us another room at a partner hostel, only he did not communicate it well enough to us making a miscommunication happened. Thankfully, we were in good hands. It was indeed a nice but rather empty hostel; We were the only guest there that night. The night was silent but we woke up to another great breakfast. The reception was very friendly. He did not speak much English but he tried so hard to greet and welcome us that morning. We booked a day tour around the city from the hostel. We had a very nice and very informative driver. We were with him until he took us to the train station in the afternoon for our journey to Marrakesh.

We arrived at Marrakesh the previous night just at the right hour to give us ample rest time as on this fifth day in Morocco we will be road trippin’ to the Sahara Desert. We were picked up by our guide from Z-BAR travel. They were very knowledgeable and fun. It was an eight hour drive with fantastic sights here and there. Trained as a geoscientist, I was spoiled by the grandeur of the outcrops seen. Wow, it was so text-book quality! Also, the Atlas region is home to the famous Argan. There are many cooperatives along the way offering visitors deeper look to the production of Argan oil, amlou and other commodities originating from Argan kernels. I fell for amlou (it is sooo delish!) and took some home!

Where to stay in Marrakesh? I stayed at Riad le Deux Portes (Riad les 2 Portes) it was a nice place to stay only couple of minutes fromthe heart of Marrakesh: Djema L’Fna square. We met Ibra, the staff at the riad. He picked us up and walk us to the riad. As we arrived he welcomed us with hot mint tea and warm smile while serving it. Hospitality at its best. Totally recommend this place.

Experienced: camped at the Sahara, stargazed, watched sunset over the dunes, rode a dromedary at sunrise and seeing countless life scenes of the Moroccan Sahara people.

Spent the previous night camping at the desert, just as early as 8 AM we got to get ready to drive back to Marrakesh. But before that we woke up to the most exciting activities there was: riding a dromedary! Dromedary is a camelid, but it only has one hump. Believe me finding yourself on the back of dromedary at sunrise exploring the dunes of Sahara… was a one unforgettable morning. 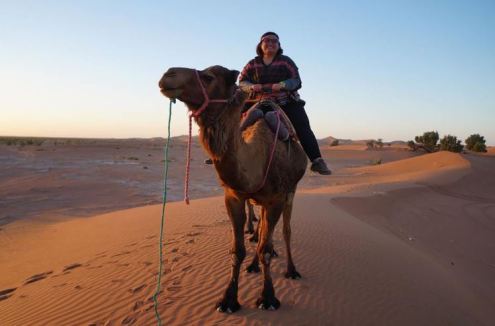 The way back was more than 8 hours as we made stops at some point of interests. I highly praise the stamina of our driver, Abdul. He drove safely and smoothly. Also not to mention Mustafa’s (our guide) effort to keep us entertained along the journey. Though some of the jokes are kinda cheesy, but we did laugh anyway. We had a great trip and tons of photo sessions. We arrived at Marrakesh just about bed time. Another night well slept at  Riad les Deux Portes.

I woke up quite beaten but giddy at the same time as this is the day to explore Marrakesh. The morning spent by exploring the Koutubia, artisan markets and more markets in the medina!!! Marrakesh was so charming. We had lunch at the L’Fna square, scoring the picture featured for this article.

In the afternoon we got ready to take another bus ride by CTM to Casablanca. We flew back home on midday the next day.

Transportation? We conquered Marrakesh by foot! As finaly we decided to explore the Medina, Koutubia and the surroundings. We only took taxi to get us to the bus station, again petit taxi to the rescue and they are to be found just around the square.

Finally… our last day in Morocco. We only have half day before fling to Doha. I decided to pay a visit once again to Hassan II Mosque, as it was an incredibly bright day and I did not want to miss a chance photographing this beautiful mosque. I did have some great photos of the mosque and with that visit I bid farewell to Morocco.

Where to stay in Casablanca? for our very short night in Casablanca, stayed at Carre Francais de Casablanca. It was (apparently) located at  the elite neighborhood of Casablanca. Very, very comparable to Menteng neighborhood in Jakarta (sorry, for non-Indonesian folks, that’s the only comparison I am sure about, 😛 LOL). Olivier, the owner was a very kind gentleman picking us up the night before. The place was very spacious and very recommended if you travels as a family. Too bad I did not have ample time to enjoy the facility as it was only for a one night good sleep.

So… that was my one week journey in Morocco. It is a very colorful country, definitely worth a visit in a lifetime. I hope you find this travelogue-reflections-itinerary useful. Keep on exploring!